The Memorial Titans football team took a little break from rigorous summer practices on Thursday as the team completed an annual team-building exercise.

The first part of the activity included speeches from Memorial Director Melissa Oliva and coaches talking about team expectations on the field, in the classroom and in the community.

The players followed the speeches with fairly faithful imitations of the technical staff for a few giggles.

“A lot of it is stressful and runs through our program core values,” Morgan said. “There are some fun parts and hopefully some learn on their own by having them stand up and talk in front of their teammates. More than anything, he tries to build that team chemistry outside of hard work.

Morgan said the coaches had been tough on the players over the summer and the staff wanted the players to know it hadn’t gone unnoticed.

“Like I always tell guys, obviously we want to win a ton of football games, but it’s our job as coaches to help them grow into young men,” he said.

“The population that we have, they don’t have a ton of positive male role models in their lives. The more we can fill that role for them, that’s a huge part, besides winning games.

Morgan said player impressions also give coaches insight into how student-athletes view them.

After the light impressions, Morgan spoke to the group about accountability and how everyone was on the same page. The head coach told the team that overcoming adversity is an essential part of playing sports and being successful in life. 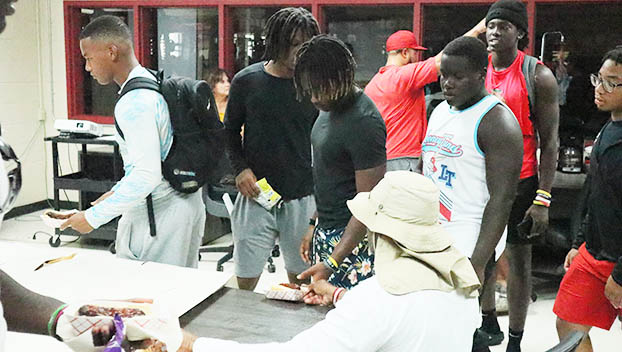 Behind him on the spotlight were two goals: state champions and being successful fathers and husbands. For the Titans to achieve these goals, Morgan said the team must come together and sacrifice for the greater good.

“It builds that squad that you will need later in games when the going gets tough,” he said. “You learn a lot about your teammates. It puts them in that family mode. They worked hard during the summer. I think it’s important to have this day to have fun and still do a lot of learning. We have new coaches and they have heard from them.

After Morgan’s speech, the coaches held competitions against selected players. The coaches swept, winning in an arm wrestle, push-ups and a run.

“We are here to win,” Mangum said with a smile. “That’s the main thing. They need to know we’re here to win. The power hasn’t changed and won’t for a while. The kids love it, though. It’s good to see them having fun. »

This Date in Baseball-Barry Bonds hit his 600th home run

Sideways to slightly stronger as bonds prepare to defend the range