The question of the day, when people don’t talk about the war with Russia and Ukraine, concerns bonds.

A few weeks ago, no one thought interest rates would go down. There were calls for not just three rate hikes this year, but rather seven, or, I’ve heard, nine.

You may recall at the time I noted that bond sentiment had turned so sour that the Daily Sentiment Index (DSI) had fallen to 15. This happened when rates over 10 years first marked 2%. They backed off and came back, making a higher marginal high and that was it.

Now rates have fallen and we are back at 1.7%, which is quite a reversal. I don’t hear about higher rates anymore. I don’t hear about seven or even five rate hikes this year. The talk of a 50 basis point hike in March is now non-existent, although there is still a chance I suppose.

It makes it all the more fascinating to hear what Fed Chairman Jerome Powell will say during his conversation on Wednesday. All I know is that there is no more chatter about higher rates and the daily sentiment index is now 52 (neutral) and it seems to me that 1.65% is a pretty good support so far. I don’t think the sentiment has flip-flopped, but it has certainly changed a lot.

Not only is everyone concerned about iShares iBoxx $High Yield Corporate Bond ETF (HYG) now, but my question is, why weren’t they concerned two months ago when the real spill took place? I’m looking at this chart and I think it looks like Tuesday was a day back and filling after hitting resistance. Guess that low at $81.50 is holding for now.

Sure, stocks fell on Tuesday, but look at the number of stocks hitting new lows on the New York Stock Exchange. They don’t stand out on the chart, do they? They continue to contract. 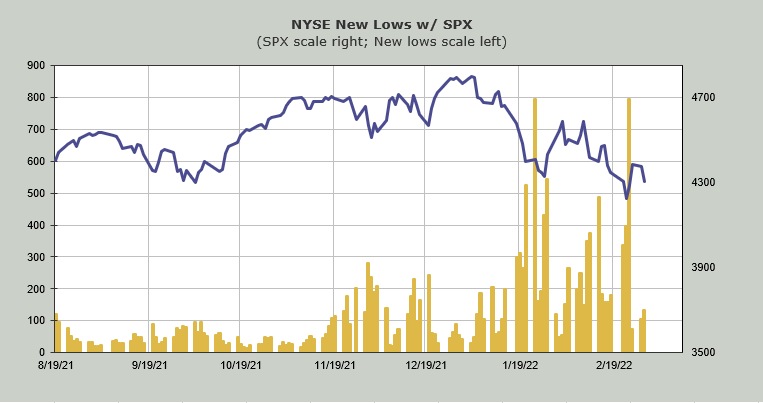 As for new highs, the NYSE has seen the number of stocks reach new highs more than doubling since Friday. Sure, they’re still down at just over 100, but that’s the most there have been in six weeks. 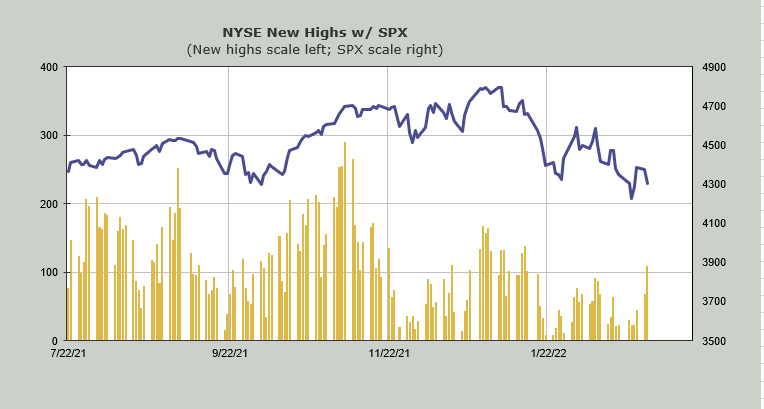 I think this market is a commercial market. No group gets a trend for very long. As soon as there is too much love for a group it is reversed and it is the same for too much hate. A case in point is how people went from thinking the war was bullish at the end of last week to thinking it was bearish this week.

The market is not in great shape, but I prefer to focus on the indicators, which say that we should bounce once more before returning to an overbought situation.

Receive an email alert each time I write an article for Real Money. Click “+Follow” next to my signature for this article.